What is a spell? When should you do one? What are the consequences? What are the mechanics? Betwixt and Between chat about their spell experiences, philosophies, and even foibles.

Note: We are not Law-of-Threefold-Return Witches. We are more equal-reaction Witches, which we both feel falls in line with the natural order of things. So actions, even magical ones, have consequences. Absolutely. No question. But the Law of Threefold Return doesn’t ring true for us. If it has been your experience, that is more than valid, and I certainly hope you are getting back three times the awesomeness you’re putting out there.

How is that different than magic? Well, magic is just…everything.

Our Three Elements for the Most Effective Spells:

2. Relationships with all of the things (self, elements, spirits, ancestors, gods, etc.)

3. Effort in planning, constructing, considering, gathering…this plays back into focus of intent, essentially

This is the “blue flower” Between goes on about: Asiatic Dayflower. It is called dayflower because its blooms last only for one day (not even–I got this pic from clipart.com because the ones I saw on my walk this morning had already withered by the time I went out to take my own pics). It turns out that this native of China is a bit of an invasive weed, but doesn’t really detract that much from native species. It can be eaten, and even has antibacterial and antitussive (cough) properties, and has been used in Asia to make a beautiful blue dye, albeit not a long-lasting one. In disturbed areas, particularly ones recovering from mining, dayflower can flourish, and absorb much higher levels of heavy metals like copper, zinc, lead, and cadmium than most other plants. Here’s what I found most magically interesting: though of course this plant produces pollen, it offers no nectar. Its appearance, however, tricks pollinators into thinking they are going to get a big nectar hit. I think this plant could be utilized very effectively in glamour magic, but also could be applied to healing, especially healing of the land. 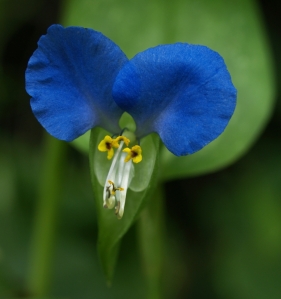 Ah, Purple Deadnettle. Once upon a time, Betwixt wrote a blog about it, so I’m just going to link to it here.

Here is the VERY PREVALENT Three Seeded Mercury. Betwixt and Between both agree that this weed is great as a hastener in spells, due to its rapid spread, triple seed, and association with Mercury. Maybe even try it in workings for communication. It has also been used medicinally, although sparingly. It irritates the gastrointestinal tract, which make me think of using it to light a fire under someone who I need to get back to me about a matter… 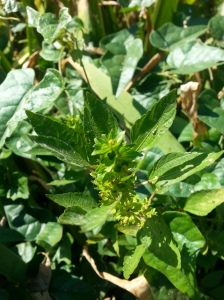 What are you, mystery plant that I thought might be Three-Seeded Mercury? Between is slightly useless at Google Image search.

However, the nightshade plant that Betwixt gave Between is very happy…

Books mentioned in the episode:

Encyclopedia of 5,000 Spells by Judika Illes